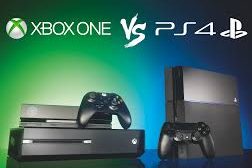 Everyone loves to play video games, but if you’re a console gamer, which console should you choose? Microsoft Xbox or Sony PlayStation? They are both great consoles for video games, live streaming videos on YouTube, and even renting movies. So…which console is better?

Xbox One is better than PS4 for many good reasons. Personally, I have been playing Xbox games since 2012 and I know the controller well. I’ve played on the 360 and the One many times in my life, and I have only played on a PS3 a few times and I could not understand it at all. However, there are many more reason to choose Xbox.

Some of the greatest video games ever made first came out on Xbox consoles like: Black Ops 2, Modern Warfare, and Halo. As of today, games that were exclusively made for Xbox 360 are now becoming compatible for the Xbox One. Sony’s PS3 does not share backwards compatibility with the PS4. Some famous games that are backwards compatible for Xbox are Call of Duty 3, Call of Duty: World At War, Call of Duty: Black Ops, and as of today, Black Ops 2. Has PlayStation even talked about doing that at all?

How about playing console games on your PC? It is called Game Streaming. The Xbox One has that. It means that if you have a PC with Windows 10 or more, you will have an Xbox app that will automatically connect to your Xbox and all your profiles, achievements, games, friends, and anything else you have on your Xbox, and it will appear on the Xbox app on your PC. Game Streaming allows you to play games on your PC straight from your Xbox, you just need to get the Xbox controller, the charger cable for the controller so you can connect it to your PC, and you need the disc for the game that you want to play in your Xbox. This technology is 2 years old. PlayStation is only now getting this Game Streaming software today. Obviously, Microsoft knows their audience and how they want to game.

6 months ago, Microsoft announced their new game console, the Xbox One S, a silver, updated version of the Xbox One. 3 months ago, Sony announced the PS4 PRO. It looks exactly like a PS4 with a different name. PlayStation is staying the same till the end, while Xbox is evolving and always getting new looks. The Xbox One S allows Xbox owners to plug in just about any USB 3.0 external hard drive while PS4 owners have to open up their console to swap in a new 2.5 inch or SATA drive.

Xbox graphics cards are also superior to Playstation. I have had my Xbox One for over 2 years, and I still have not changed the graphics card. The graphics card on the Xbox One has lower resolution which has a favor of never dropping below 30fps. However, the PS4 would sometimes drop to single digits with it’s graphics card, something to think about.

How about playing online with all your friends? Microsoft’s Xbox Live Gold($60 yearly, $10 monthly) is more stable, and has better cloud storage regardless if you have gold. Sony’s Playstation Plus Network though has suffered some pretty infamous outages. Xbox One has a slight edge over online experience as all Xbox 360 games with gold are backwards compatible.

Xbox is beating Playstation by far. Some people might rather have a PS4 because games are released on that console a month before they are released on Xbox One. But Xbox has the benefit of not having to mess around with the console to fix it or open it up like you do with the PS4. Buy an Xbox rather than get a PS4 just so you can get a new game and play it early. Yes Xbox has to wait a month after PS4, but it will be better, less lag, and no fidgeting around with cords just to get the game to work. Xbox is better. Choose wisely and have fun playing video games.