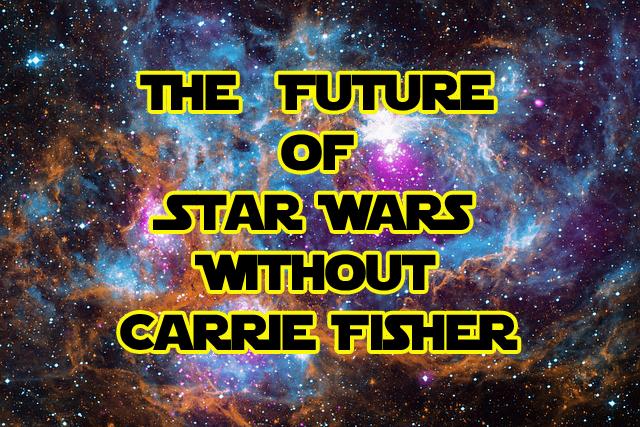 After the initial impact of Carrie Fisher’s unexpected death started to fade, many fans began to wonder what would become of her important role in the popular Star Wars saga. Some fans aren’t too worried, as they believe that Disney has plenty of time to figure things out and work through any problems that will arise without having a Princess and General Leia. Others however, are quite worried, working themselves into a total tizzy, over how storylines will be affected and changed from the original path of the story.

I am confident it would turn out well. There are some really creative nerds working there.”

Mrs. Ames is a fan of the Star Wars saga. “Well, I haven’t put much thought into it, but I assume it could do some damage to the plot, not enough to bother the average fan, but it probably will bother the crazy hardcore fans, like my son, Brian, it’ll definitely bother him. Although from what I know of Star Wars there is still plenty of unknowns, so they’ll have plenty of time to figure it out. I personally thought Leia would be the face of the counter-force against the First Order but they can probably kill her character off and spin it into a passing of the torch, since a new group of young main characters has been introduced.”

How do fans feel about Disney confirming that they will not use CGI to keep Carrie Fisher in any further movies, even though they technically already did?

Josh Palmer, a GCHS band director, said, “I actually think it’s wise not to use CGI to keep her in the  movies. When they did use it in the past it was for one scene and they had her consent to recreate her from when she was what—thirty something? And that was when she was alive, but now, to do it for a whole movie, or even a majority wouldn’t be right. It also probably is a matter of giving the family time to mourn and respect her memory.”

According to Ethan Anderton of Slashfilm.com, it has been said that Leia was supposed to have big scenes where she would confront Kylo Ren as well as reconnect with her brother Luke. So how will Disney cope with quite possibly not being able to film that and maybe rewrite the script?

“Well, I would hope those scenes have already been filmed because those would be some cool scenes! But, if they haven’t filmed that already then yeah, there would have to be a definite rewrite, but I am confident it would turn out well. There are some really creative nerds working there,” said Palmer.

But fans still want to know how Lucasfilm will cope with the actress’s recent passing.

Michael Zambito, a junior At GCHS and a fan of Star Wars had this to say,“I think it’ll be interesting how they do it. I doubt they’ll have a new actress, people would definitely get mad. They’ll likely kill off her character.”

With so many things having to be changed it only makes people wonder about how extensive of a re-write Lucasfilm will have to do and how much it will take away from the original script,or how many holes it will make in the plot.

“Well they’re definitely going to have to re-work the 9th movie since her role can’t really be filled. They may have to change the end of the 8th to fit the rewrite. I really don’t think there’ll be too many plot holes though. See, the story lines throughout the series, whilst filming even, were never set in stone. For example, 1,2,3 or technically 4,5,and 6, those storylines  were played around with a lot before being finalized. No, I think they’ll be good movies, they’re (Lucasfilm) on a roll right now with the 7th movie and Rogue One,” said Zambito.

Whether the final decision of how to keep Leia in the script ends up being to kill her off, or use a stunt double, or any of the multitude of options that are possible to keep her in the future films. Being a fan of the saga myself, I agree with the majority of fans in the thought that Leia’s character will sadly be killed off, but I can only hope that it will be in a way that honors her memory  for a long time to come in a galaxy far away.