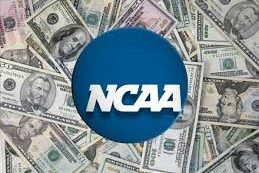 The National Collegiate Athletic Association, popularly known as the NCAA, is an organization made up of thousands of Universities and Colleges across the country. These schools recruit thousands of athletes every year to come play sports and represent their school at the college level. The ability to play a sport at the next level is an amazing accomplishment and a once in a lifetime opportunity, but are the stipulations of the NCAA code of conduct worth it, or are you selling your soul with devil when you sign that contract?

The NCAA does a lot of good things for student athletes, and it claims its number one focus is the success of the student athletes on and off the field. They also claim that 96% of all proceeds go back into funding the student athletes and members. Many people are skeptical of this. Some believe that the NCAA is corrupt and only use the student-athletes as pawns in their game to make more money. There are very convincing examples out there that would lead people to believe this.

Donald De La Haye was a kickoff specialist on the University of Central Florida football team. He was declared ineligible when the NCAA heard that he was making a small sum of money making entertaining videos on Youtube. De La Haye was given the ultimatum to either stop collecting advertisement revenue from these videos or to be declared ineligible to play football by the NCAA. De La Haye did not back down from his fight with the NCAA; he fought and fought for weeks fighting for the right to make money off of his Youtube channel that was paying for his education, along with his football scholarship. He ended up losing against the NCAA and chose to keep his Youtube channel instead of not collecting the advertisement revenue. If the NCAA was really all about the success of their student-athletes, why wouldn’t they allow De La Haye to keep his channel and pursue his passion of playing football? De La Haye’s Youtube channel can be found by searching “Deestroying” on Youtube.

Silas Nacita is another example of the NCAA being more focused on money than the success of their student athletes. Nacita was a walk-on running back at Baylor University. After playing one year of college football at a community college he decided to transfer to Baylor. Once he had made the team, Nacita was homeless and did not have a way of paying for college other than a football scholarship and government help. That’s when a friend had heard about Nacita’s living conditions and told his grandparents. The grandparents offered Nacita a place to stay, food to eat, and to pay for his classes at Baylor. Once the NCAA had found out about this they instantly declared Silas Nacita ineligible and would have stripped Baylor of their wins and their bowl game if he continued to play. In an interview about the situation, Silas said, “I worked so hard for 12 years for this game, and I have lost it…Whatever it is [I need to do to play again], it would be worth it.” Nacita has done anything and everything to regain his eligibility in the NCAA, but due to their strict and unjust rules and regulation, Silas Nacita was never able to play college football again.

This year, Josh Rosen, a top quarterback in the NCAA from the UCLA had opened his mind on the NCAA and how it deals with student-athletes and their education. These student-athletes compete in multi-million dollar sports and the only pay they get is in their education; however, in most cases this education is next to impossible to obtain due to long days with practice, always traveling, and focusing on their sports, in this case football. Rosen was quoted saying, “Look. football and school don’t go together. They just don’t. Trying to do both is like trying to do two full-time jobs.”

These three students are just some of many athletes that have to go through the NCAA’s hard and strict rules. You would think that a corporation that makes millions of dollars each would treat their athletes fairly, but that’s not the case at all. Even the big leagues should have a say in this unfair treatment, the NBA requires that you must play one year of college basketball before being eligible for the NBA draft, but what about that year where you are only getting paid in an education. This is a bit controversial because they require a student to go one full year of college, paying all that money for classes just to be wasted a year later when you get drafted.

The NCAA needs to fix their rules in more ways than one. Many are unjust and unfair to the student athletes who are making the corrupt NCAA millions of dollars and getting nothing in return other than an education that is next to impossible to obtain. The NCAA needs to stop using their student-athletes for their own profit and actually put the needs of the student-athletes ahead of their own money-hungry selves.