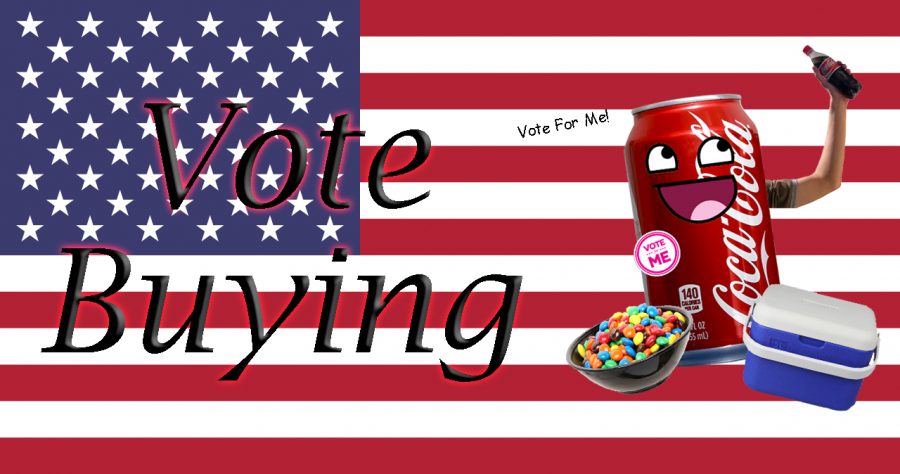 With the GCHS Student Council elections just coming to a close and the 2017-2018 school year winding down, the students are looking toward a new school year full of new possibilities.

However, when looking at the recent school election, we also have to look at what turned out to be a hot-ticket item: buying votes.

Have you ever thought about the agenda that a candidate could be pushing when they shove candy or buttons in your face and say, “Vote for me”? Of course, there are candidates who do it because they genuinely want to make a change, but some candidates might want to be elected just so they can have a title.

During the recent election, this seemed to become a common occurrence. People walking the hallways, munching on everything from candies to cookies, and writing with personalized election pencils. Some students, however, felt that instead of being recruited, they were being targeted. Billy Armbruster, a senior, said, “People didn’t really try to give me anything because I couldn’t vote, but I saw a lot of it happening. I’m almost glad, because I would’ve felt like I was taking a bribe.”

This wouldn’t be such a problem if it weren’t so effective. We have seen several instances where the candidate with the most to offer in monetary value trumps the more qualified candidate. As long as you have something tangible to offer, you’re a shoo-in for the position.

I’m not here to bash our Student Council representatives running for office. In fact, this isn’t that large of an issue here at GCHS because every candidate participates. No one candidate out-bribes the other, and the students aren’t pressured to vote for a candidate based on their snacks. But once this becomes a problem, it’s hard to keep it from growing. If we allow this electioneering to continue, it will affect our school, our community, and even our personal relationships. We have to realize that this is a high school election. Nothing more.

We cannot base our electoral decisions on who has the best cookies. We must decide who would be the best person for the job based on their personalities and qualifications. If we allow bribery to take over small political systems, we open the gates to it happening in larger and larger political systems.

So please GCHS, vote based on merit, not on mom’s baking.