“My son came to me with this,” Holt explained through Facebook, “A kid or kids at the high school are writing this on a thread about tomorrow.”

Holt then posted a screenshot of a chat between 4 students on a private chatroom called Discord. The comments were posted under #nsfw (Not Safe For Work) and stated that “Some of you guys are alright. Don’t come to school tomorrow if you know what’s good for you.”

When asked about the situation Principal Depew stated that “We had a student make a threat on social media. We shared that information with the police department. They investigated, and within an hour they were able to discover who it was and had the person in custody.” 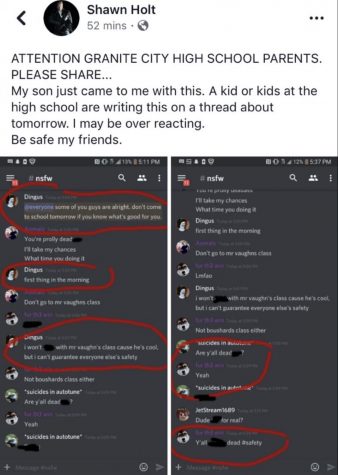 Sources say that the alleged student involved was a senior at GCHS who was quiet and kept to himself.

Grace Catanzaro, a junior at GCHS said that “It was terrifying. I knew the police were getting it handled but it was still scary to think about.”

According to CNN, there has been, on average, one school shooting a week in 2018. Twice as many students have been killed in a school shooting than members of the military who are on deployment.

Catanzaro continued by saying that “You see it on the news all the time but then the fact that it’s like at our high school that’s kinda scary.

You see it on the news all the time but then the fact that it’s like at our high school that’s kinda scary.””

Many students chose to stay home from school today because of the threats.

Granite City High School takes all necessary precautions to ensure the safety of the students and faculty. The School District employs a full-time police officer and today there is an increased police presence. “I want to assure everyone here at the high school that you are safe.” Principal Depew stated this morning as he addressed the student body, “There is no reason for you to be concerned. We are taking care of all situations. Relax.”

To prevent this from happening again Depew encouraged everyone to “be extremely cautious about what they say not only to their friends verbally, but also through social media. I would also say that if you hear something or see something to let people know.”

Students were encouraged to treat today like a normal school day.