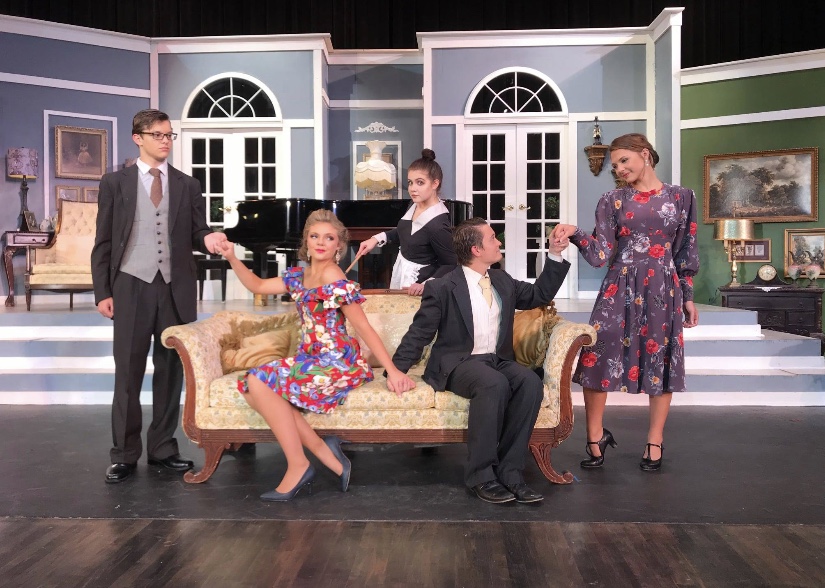 “This production goes down in the books as one of the best from this school,” said John Lucas, reminiscing as he thinks about his last Homecoming show of his high school career.

This year’s Homecoming show at GCHS titled “Private Lives” was a memorable play about the story of a divorced couple who, while honeymooning with their new spouses, discover that they are staying in adjacent rooms at the same hotel. The show featured 4 seniors: London Kimble, John Lucas, Kenzie Richards, and Clayton Stimac; and one junior: Whitney Klee.

The Homecoming production brought many laughs, and behind the scenes were both tears of joy, and tears of sadness, as the seniors reflect on their high school theatre career.

When asking the cast members about who they played in the show, they seemed to transform into the characters themselves. “I played Amanda, a wealthy woman from the 1930’s. I was very excited for my fight scenes with John Lucas!” London Kimble said excitedly. John Lucas played as Elliot Chase, who was the divorcee to London’s character. Along with them, Clayton Stimac acted as Victor Prynne, Amanda’s newlywed husband, and Whitney Klee was Sibyl Chase, Elliot’s newlywed wife. Kenzie Richards performed as the extravagant Louise- who was a French maid throughout the duration of the show. Kenzie only spoke French!

What was the cast’s favorite part of the show?  “I was most excited about hearing the crowd laugh on opening night; that’s always a great feeling,” responded Whitney Klee. The others agreed as they laughed together, reminiscing about the hours upon hours that they spent together preparing for the show. “I’m so glad I got to experience the show with this cast!” Kenzie said enthusiastically. John Lucas added, “The crew behind the scenes were also awesome! Without them, we wouldn’t have our stage. The entire foundation of our work was in their hands, and they did fantastic.”

The cast also commented on the famous Mr. Manoogian, the director of the theatre productions at GCHS. “I have been working on stage with Manoogian for 8 years, and he has taught me so much. Not only as an actress, but also as a person.” said Whitney. The cast agreed and validated all of the hard work that he does for them behind the scenes. “And no, he is not as bad and scary as everyone thinks. He has helped me define my characters and portray something as if I actually were that certain something.” John says, and affirming nods from the others hold this claim true. They are very thankful for Mr. Manoogian and everyone that works behind the scenes. London exclaims, “He is a true theatrical genius!”

One particular question for the seniors- This is your last Homecoming show, how do you feel? “This is so bittersweet. It’s weird to think I’ll never be in another Homecoming show,” responds Kenzie Richards, a glimmer in her eyes that gives away the immense compassion for theatre at GCHS. London Kimble hugs her cast and smiles as she expresses her true emotions for the stage. “I remember my first homecoming show freshman year, and that cast gave me lifelong friends. My journey from that show to now has shown me how much I’ve grown as an actress. I will never forget my experiences on the stage here at GCHS, and I have so many people to thank for getting me to this point. My goodbye on stage signified my passion for connecting with an audience, and this is very bittersweet. On to the Christmas Carol show, and our spring show we go!”